We met Dusty in the weight room as she was (also) being tortured by her personal trainer, Jill Dearmin.   That said in a very affectionate and appreciative way of course…

Turns out you can never guess where a person is coming from or what they’re about until you spend a little time on their story.

Dusty is a Florida-born native, from here in Palm Beach county.  She went to school at Forest Hills High and after graduation moved on to Harvard Extension where she was a psychology major.

For the past 25 years, she and her husband have owned and operated Atlas Sign Industries which does business internationally for many Fortune 500 com

Starting with only three employees, they now have 309.  They travel quite extensively for the success of the business, noting only 47 days at home last year.

Dusty was inspired by her oldest daughter 3 1/2 years ago to enter a bikini contest.  This Mom of four says it changed her life: she a nd her daughter joined a gym, began working out with Jill Dearmin, and three months later entered that bikini contest.

To date she’s lost 57 pounds, works out six days a week, two times per day, and is extremely disciplined with her eating regime.  Dusty was recently dismissed from jury duty because the judge thought her cooler filled with pre-planned portions of meals that she needs to stick to her plan of six small meals per day, would be distracting to other jurors.

For anyone who needs some motivation, Dusty also finds the time to volunteer with a social works group she met during her time at Harvard, a group that has ties to University of North Carolina.   Her most momentous trip was to South Africa in 2013 (to Cape Town and Johannesburg) where they spent a month working with battered, abused and raped women; many that had contracted AIDS through these attacks.  “These are children who’ve been raped since birth, they contract AIDS, most do not live long.” shared Dusty,  “It’s an amazing gift to be able to meet these women and to offer them something that they’ve never been given before: kindness.”

Dusty attributes the “debriefing” times with her group that helped them all process what they were personally seeing and feeling by working with these women.   During this same trip they spent two days with a tribe in Soweto, and had the honor of dining with Nelson Mandela and his wife, Graca Machel, before his death.

Other humanity, social work projects have included Race for the Cure, Light the Night, Leukemia and Lymphoma Society, and as a FEMA verified Disaster Recovery First Responder.

She shared other hobbies an 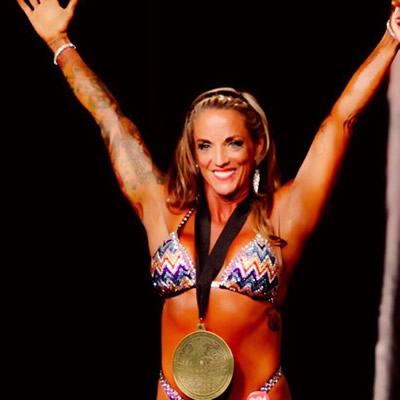 d life interests include: “My grandchildren, children, working out, surfing, boating and my five beloved dogs.”

This lady is one cool cat, filled with energy for life, enjoying her successes and paying it forward. She and her trainer Jill Dearmin compete in the Karina Nascimento IFBB Classic show on February 20th at the PGA National, then on to the Arnold IFBB Classic in Columbus, Ohio, on March 4th.

We’ll be watching the stage to see how she does, so stay tuned on www.Facebook.com/LoggerheadFitnessJuno to support her efforts.